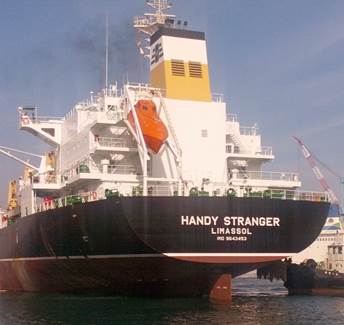 Grecomar is a typical example of a conservative family-run Greek ship-management Company of low profile but high quality standards.

It was established in 1959. The initial activities of the Company concentrated on agency, ship broking and subsequently ship management. Later on, the Company moved into ship owning of small cargo coasters.

In the 70s the Company used to control through affiliates a fleet of tween-deckers of 5/10.000 dwt mainly trading and Continent. As from early 80s it gradually shifted to management, chartering and operation of loggers and handy bulkcarriers of 10/25.000 dwt with worldwide trading. Later on the Company moved to Panamax bulk-carriers. Occasionally, the Company has been also involved in C.O.As as charterer/operator and period charterer. At a relatively small scale the company continues to act as Agent and Shipbroker.

In addition to the cargo ship activities, the Company and its Managing Director have been also involved in ferry boats operating in Greece the management of which is currently carried out by affiliated company.

The core activities of the Company in recent years concentrate in the management and operation of bulk-carriers from Handies up to Panamaxes.

Over the last 20 years Grecomar was involved in more than 50 S+P deals.

The full Commercial and Technical Management of the cargo fleet is carried out in- house without any outsourcing.

No managed ship has been ever involved in any significant pollution incident.

Grecomar is fully ISM certified since early 1998. Its Safety Management System was developed and is being maintained in-house by own resources.

All cargo ships as from 1986 are consistently manned by 2 Greeks (Master & C/E) and Philippinos well in excess of relevant flag requirements. The Company avails its own informal pool of Philippino seamen with a retention range in the region of 70%.

Grecomar is member of BIMCO, INTERCARGO, UGS, CUS and other shipping organizations.